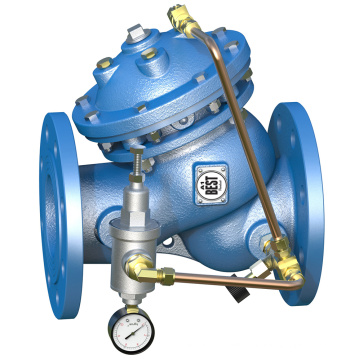 In a situation, that I term “light duty”, meaning that the pump is not cycling often, and there is not a large volume of media at play, (water as an example), a swing check would likely be fine in that application. However, in a situation where the pump is cycling often, and is dealing with a large volume of fluid (horizontal orientation), several things can happen, if a swing check is misapplied in this case.

Due to a phenomenon known as column separation, an inordinate amount of head comes back onto the pump when it trips. In this case, a swing check does not close quickly enough to prevent backflow from getting past the valve, and when it closes, it slams shut, and backflow behind the valve hits the disk, the energy has to dissipate somehow, and it does so in the form of water hammer. This occurs because a swing check largely depends on back flow for it to close. A non-slam check valve does not. It utilizes a coiled spring, downstream from the valve disk, that moves the disk toward the seat as soon as the flow velocity slows down. This valve is designed to be closed, just before zero flow is reached, thereby eliminating backflow. With no backflow, the cause of the water hammer disappears.

In addition, if a misapplied swing check sees a number of slamming incidents, it is possible for the hinge pin (holding the valve disk in place), to crack, and break off, thereby sending bits of metal downstream, potentially damaging components downstream of the check valve. It is also possible for the entire disk to break off, sending it downstream, leaving nothing but a spool piece.

Designers and maintenance personnel should be aware of situations where backflow and water hammer can be a problem on pump discharge and consider the use of a non-slam check valve in these cases, thereby eliminating the chance that you to may find a disk in your sump!

As the manufacturer of A1BEST® silent check valves, A1BEST INTERNATIONAL CORP. is proud to represent a company that is known around the world as the valve to use for preventing or eliminating Water Hammer problems – A1BEST® Check Valves, Serious performance, Superior reliability.

Design and manufacture as per ASME B16.34;

Flange dimension as per ASME B16.5;

Pressure-temperature rating as per ASME B16.34;

A1-BEST is one of the professional valve manufacturers in China and Taiwan for over 20 years, a worldwide valve solution manufacture with full range and specifications of various valves: Ball Valve, Gate Valve, Globe Valve, Check Valve (NRV)Butterfly Valve, Forged Steel Valve etc.
A1-BEST has been struggling for carry out most cost-efficient, easy performance and long last life products for global market.
At present, A1-BEST occupies 100,000 m2 with 15 workshops cover 3000~4000m2 of each. It locates in High-Tech Industrial zone of Kunshan Jiangsu Province. Products meets industry standards as per ANSI 16.10 / ANSI 16.11/IS/BS/DIN/JIS.Material of construction is selected based on Pressure / Temperature limits and corrosion resistance or customers` requirements. This will be as ASME/ANSI 16.34 standard .testing is carried out as per API/BS/DIN standard.

Email to this supplier